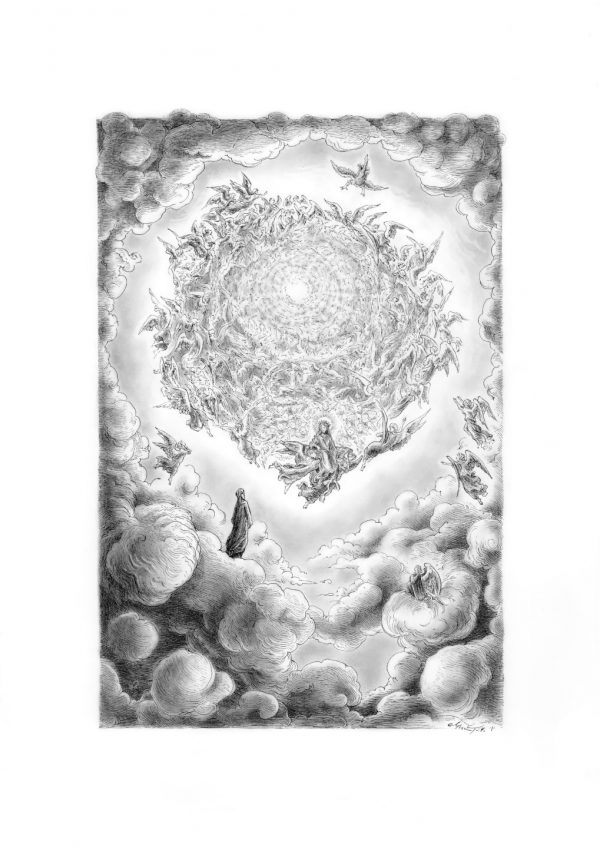 The Dante’s Paradiso print is an accurate reproduction of the original ink and charcoal artwork by Miriam Tritto.

Unnumbered and unsigned reproduction of the original artwork by Miriam Tritto dedicated to the XXXI canto of the Dante’s Divine Comedy. This work of art has participated to Terzine incatenate dal Sommo Poeta collective exhibition at Spazio Papel art gallery in Milano. Dante’s Paradiso illustration is realized on paper with ink and charcoal medium. 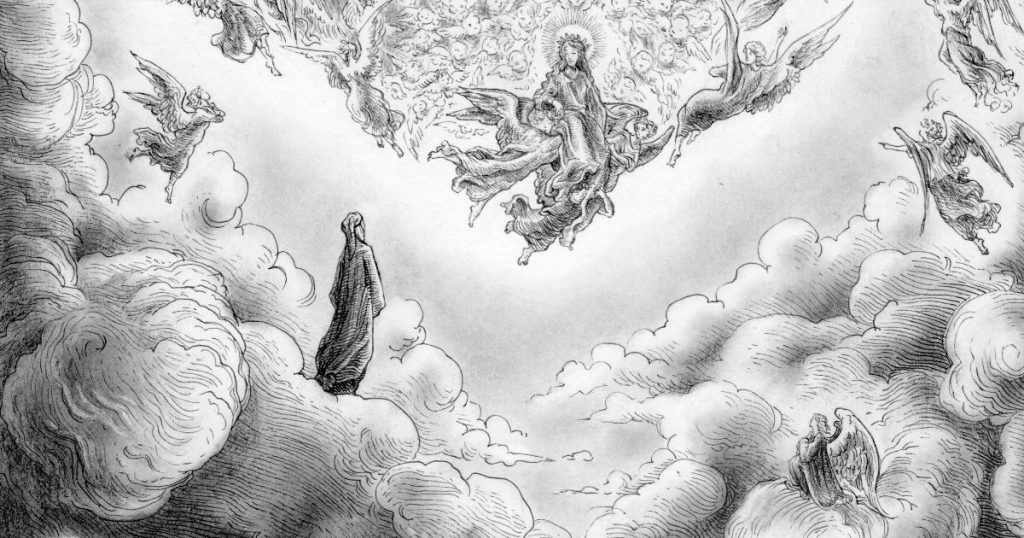 In the Empyrean, Dante (the character) surveys what is around him now that his eyes have been fully opened. He sees the heavenly structure before him that is in the shape of a white rose. This is the Empyrean and it is filled with all the blessed souls in paradise. He sees angels flying around, going back and forth from the center point, which is God, to the flowers, who are the souls sitting inside the white rose. He is so awestruck he feels like a barbarian who has lived in huts stepping into the glory of the city of Rome for the first time. He stares into the rose and for the first time since coming to paradise can see clear faces, other than that of Beatrice. He turns to ask Beatrice some questions but finds that she is gone and in her place is a kindly, old man who later we learn is St. Bernard of Clairvaux. Bernard tells Dante to look at the third to last row of the rose and there he can see the beautiful face of Beatrice who has taken her assigned heavenly seat. Though the distance may be hundreds of miles away, Dante can clearly see her face as if it were close by. Realizing that his time with Beatrice is over, he says a prayer of homage and gratitude to her for saving his soul. She smiles back in acknowledgement that she has heard his prayer. Bernard instructs Dante to now focus on the Queen of heaven if he wishes to experience the complete divine vision. Looking up Dante sees the brightest face of the Empyrean, the Blessed Virgin, shining like the sun and with a host of angels dancing about her, bringing pleasure to all the other souls. Dante and Bernard stare at the Virgin Mother in fixed mystical gaze.

Be the first to review “Dante’s Paradiso print” Cancel reply